REGISTER FOR THE 21/22 PLAYWRIGHT’S UNIT SHOWCASE! 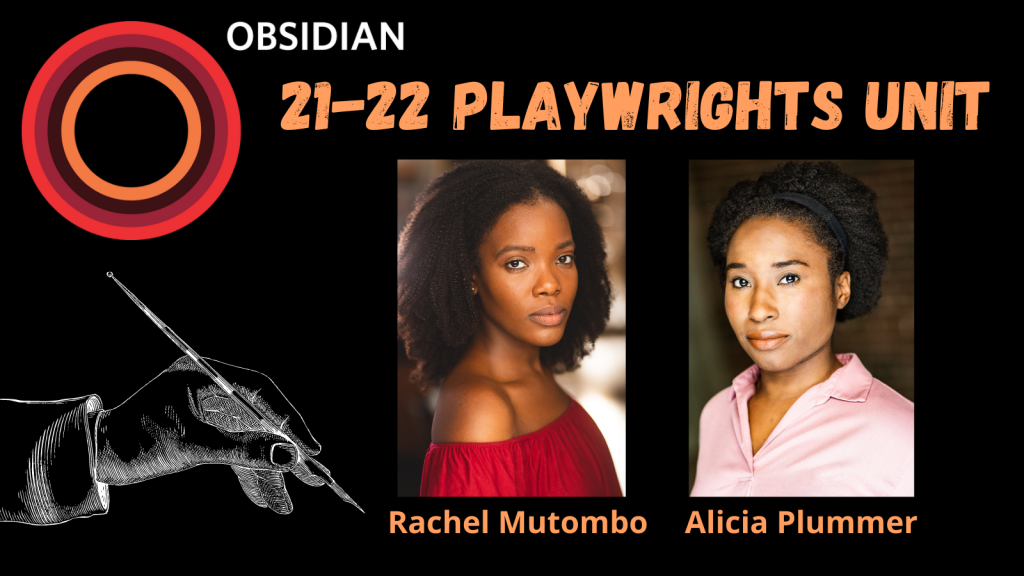 Rachel Mutombo is an award-winning actor and writer. An acting graduate of the National Theatre School of Canada, some recent theatre performance credits include Antigone (Young People’s Theatre) and School Girls; Or the African Mean Girls Play (Obsidian Theatre/Nightwood Theatre). Rachel is also featured in the recurring role of Darby Gruss on Freeform’s The Bold Type.
As a freelance writer, Rachel has had essays and articles published by CBC and Intermission Magazine. She was recently awarded the inaugural IBPOC Commission from Persephone Theatre and is developing a brand new play called Wake. Rachel is currently part of the cohort of The Bedrock Creators’ Initiative at Factory Theatre developing her play Vierge. Vierge was recently awarded the Kevin award for first place in Infinitheatre’s annual playwriting competition. The jury for the prize stated that Rachel is “…one of the most exciting, original voices to come out of Canadian theatre in many years.”

Alicia Plummer is an actor/creator from Scarborough, Ontario. Recently she has had the pleasure of acting in a clown workshop with Carousel Players, as well as playing Belize in a reading of Angel’s In America: Millennium Approaches done by Little Wood Smith & Timber Beast Productions. She has also been involved with Mixed Company Theatre, The Paprika Festival, and Canadian Stage’s Territorial Tales. Last year her poems, Recognize And Get Empowered, and I Am Not a Spray Tan were published on Trick Magazine’s website. Within the same year, she wrote and directed her comedic play, Fandom, for the Northumberland Summer Shorts Festival, August 2020. This past summer, she had a reading of her horror themed Caribbean play, Shut The Front Door, air on PROGRAMSOUND.FM radio. Alicia is a proud Black woman, who is all about representation in the arts, and hopes to inspire other Black folks to be brave, and be bold. She is super grateful to be part of Obsidian’s Playwright’s Unit this year and is stoked for the journey of play creation.

Young, witty, and determined to get over her stage fright, university student Sincerity Richards finds herself distracted by obsessing over a relationship that never actually started. Her roommate David is along for the ride. This coming of age dramedy includes moments of how fun and awkward any talking stage can be.

Lisa Codrington is an actor and writer based in Toronto. She has been nominated for the Governor General’s Award for Drama and is a recipient of the K.M. Hunter Theater Award and the Carol Bolt Award for Playwrights. Selected writing credits include The Prescription – 21 Black Futures (Obsidian/CBC) The Adventures of the Black Girl in Her Search for God (Shaw Festival, Karamu House); Up the Garden Path (Obsidian Theatre); The Aftermath (Groundswell Festival, Femfest); The Colony – Opera to Go (Tapestry); Cast Iron (Nightwood Theatre & Obsidian Theatre). Currently, Lisa is developing two new plays and is playwright in residence at Why Not Theatre. For a list of Playwright Alumni please visit our Playwright Unit Alumni Page